Will tax-free accounts become taxable in the future?

A fickle Congress can change its mind

We have seen it any number of times. Below is a list of U.S. Government Tax Acts just in the past decade. I love the names...

Here is a question I get almost every day:

We all know taxes will increase in the future. What’s your opinion on the tax laws changing where tax free income today becomes taxable income tomorrow?  We don’t have a crystal ball but it’s clear they (the Internal Revenue Service) will need more and more tax revenue and what’s to stop them from denying people tax advantages and/or restrictions on income, especially tax free income?

And it's a valid question.  There are three alternatives for the government in the current scenario:

We are now seeing the effects of #1. In the space of 18 months, the Fed increased its balance sheet by $4 trillion. And the federal government handed out trillions in its various gimme/stimmie programs. Businesses, meanwhile, were closed. Output was discouraged. Was this not a recipe for inflation? And now, inflation is here… at levels not seen since the 1970s.

#3 is only going to happen in an apocalyptic scenario.

So, we are left with #2. The next question is, 'where will they get the money?'

It seems to me this is the low-hanging fruit. We discussed these plans several times before. These folks made a deal with the Internal Revenue Service, and they knew going in they had a 'partner'. That partner is running trillion-dollar deficits, and must be looking hungrily at these tax-postponed accounts.

We generally consider only two types of accounts/assets in the tax-free bucket. Those include Roth IRAs and 401Ks and Cash Value Life Insurance (often called LIRP). Let's discuss them separately. 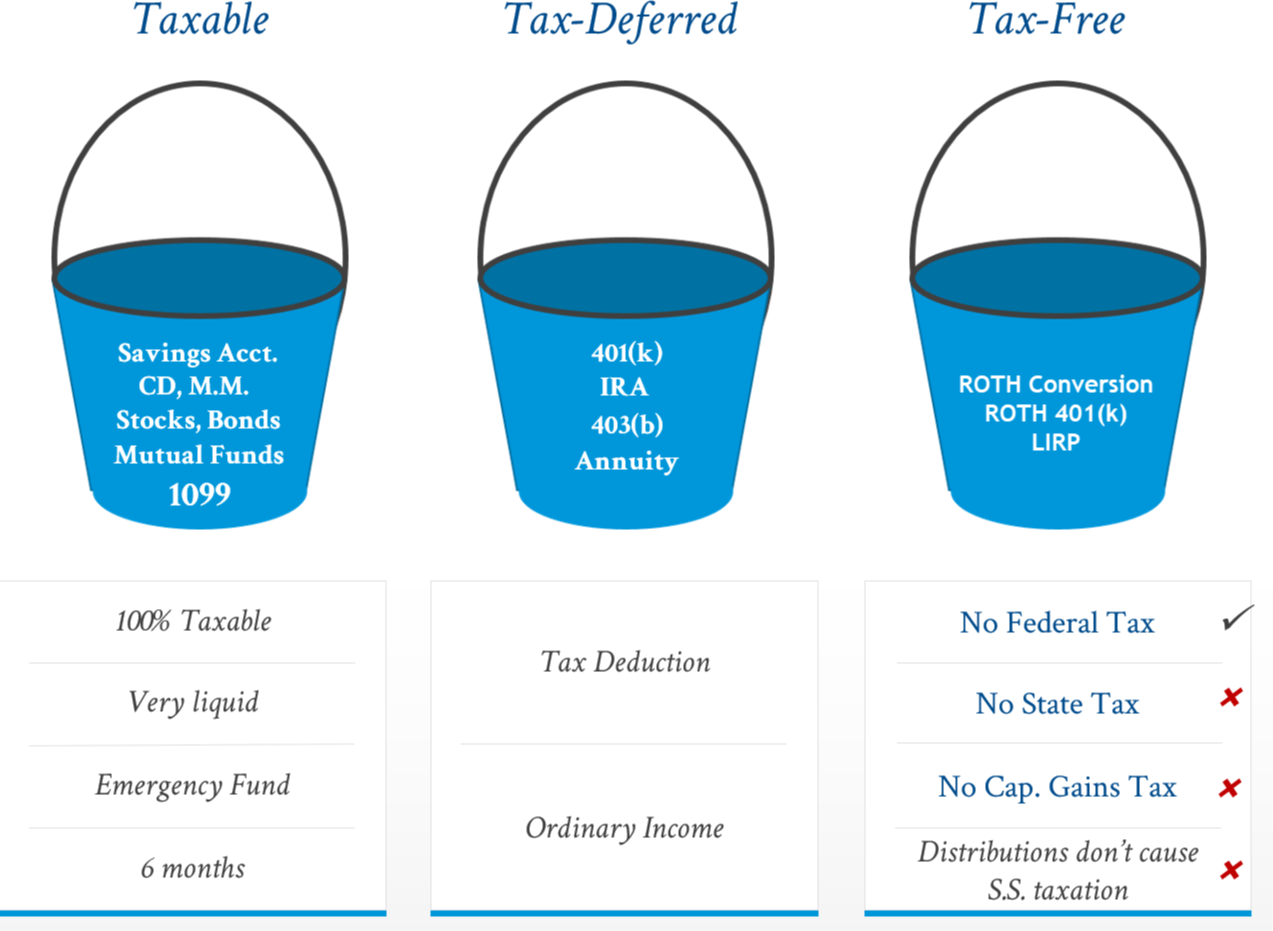 The principal difference between Roth IRAs and most other tax-advantaged retirement plans is that rather than granting a tax reduction for contributions to the retirement plan, qualified withdrawals from the Roth IRA plan are tax-free, and growth in the account is tax-free.

The Roth IRA was introduced as part of the Taxpayer Relief Act of 1997 and is named for Senator William Roth.

As these accounts contribute income to the Internal Revenue Service today, they are favored by the government. As more people are realizing the tax time-bombs they've created in traditional plans, they are seeking conversion strategies to minimize these future taxes. So, Roth is popular with both the government and consumers.

The likelihood of them being taxed is fairly low, in my opinion. It's difficult to find the total assets in these accounts, but it's in the order of $1T....very small compared to the numbers above. As these funds already have been taxed; politically, it'd be difficult to tax them again.

Now, the government already has limited contributions to these plans, and has mooted limiting the amounts that can be converted. So, while restrictions may well increase, taxation upon distribution is unlikely - at least in the next few years.

A Life Insurance Retirement Plan (LIRP) consists of a specially-created and funded permanent life insurance policy. It's built to maximize cash value, with the intent of creating a tax-free income stream or 'bucket' in retirement. Permanent life insurance policies accumulate tax-deferred and allow for withdrawals and loans to be taken as tax-free distributions. Tax-free income does not count as provisional income and reduces the chance that Social Security income becomes taxable.

The unique tax advantages of permanent life insurance are clearly spelled out (and limited) in Internal Revenue Service guidelines called TEFRA DEFRA and TAMRA, which came about in the early '80's. While these sweeping changes altered the landscape, they didn't mean the end of these assets for tax-advantaged planning. It's important to note that existing policyholders were grandfathered - their policies didn't change.

In fact, the regulators continue to tweak the laws affecting these tools. Just last year, the IRS changed section 7702. 7702 refers to the section of the IRS tax codes enacted in 1984, that outlines how life insurance should be treated from a tax standpoint. The most important point of the code to note is the MEC limit. This governs how much someone can fund a life insurance policy before it loses its tax advantages and becomes a Modified Endowment Contract.

It's important to understand the differences in law governing these various assets.

Qualified plans such as 401ks and IRAs are governed by tax law. Tax law is changed regularly (see below!). Contract Law, on the other hand, changes very slowly. As stated above, life insurance policies are governed by the Internal Revenue Service. However, life insurance policies are contracts, and are very difficult to change once in force. Historically, such as in 1984, and only last year, those in-force policies have been left unaffected when tax laws change.

Life insurance accounts are unlikely to become taxable any time soon. In any event, history has shown that current policyholders will be exempted from upcoming changes.

So...back to the question. Will these accounts become taxable..?

The Congress can do many things. An empire in debt will need to look wherever it can to find tax revenues. We are likely to see many more appropriation measures going forward.

For assistance navigating these laws and continuing changes, contact us.