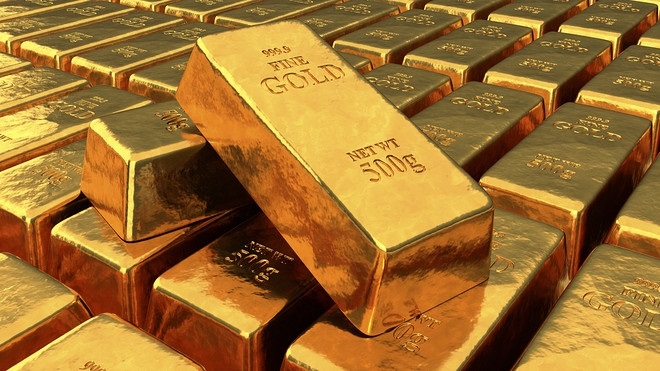 Amid the strong rise in commodities over the last few months, gold has underperformed dramatically. Since August of 2020, copper, platinum, and palladium are up 48%, 32%, and 10% respectively, while gold actually dropped 10%.

Gold is widely considered as a hedge against inflation. But, even though the market is starting to wake up to the reality of rising inflation, gold hasn’t been able to find a bid. 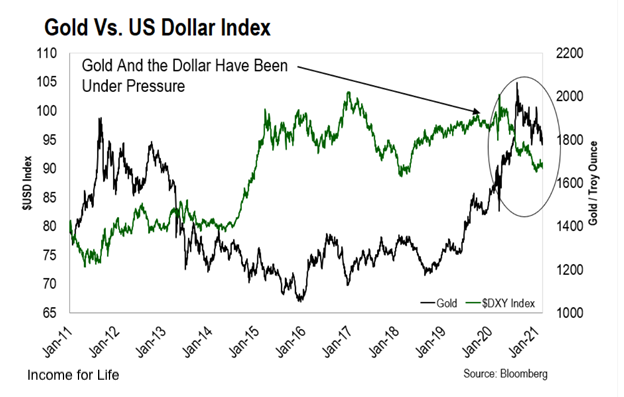 There are dual forces at play when it comes to gold. The dollar plays as crucial a role as interest rates.  You can’t look at gold prices without considering the currencies in which they are denominated. You then have to ask, what affects currencies?

You see, while rates have been rising, the dollar has been weak.

And, historically, gold and the dollar have been negatively correlated. Gold tends to rise as the dollar declines. This is one reason many gold bulls are calling gold undervalued.

Over the last 10 years, for example, monthly returns in the dollar above 1% would translate to 1.6% losses for gold. And on the flip side, when the dollar would fall more than 1%, gold would rise by 2%. Currently, the dollar index is at a three-year low with investor consensus leaning even more negative on its prospects. 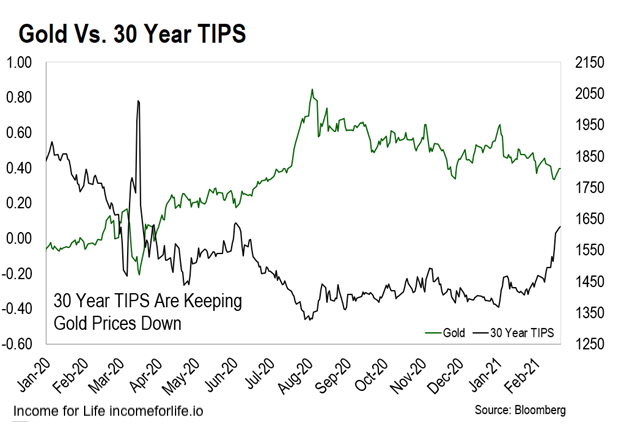 These two market forces dominate gold prices interchangeably, driven by market sentiment. Is that sentiment about to change? Based on gold’s recovery the last few days, it just may have.

Global gold production has flatlined at around 3,300 metric tonnes over the past five years. Production is declining, partly due to COVID-caused mine shutdowns. Strong hands refuse to sell the gold they own while new demand is surging. Flat supply and surging demand is a recipe for higher prices.

The U.S. Mint has announced that it was not able to keep up with the demand for gold and silver coins through 2020 and into January 2021.

This does not mean there is a global shortage of gold and silver bullion; coins are a relatively small part of the overall bullion markets. Most physical gold and silver transactions are in bars and involve much larger quantities purchased by central banks and ultra-high-net-worth individuals.

But coin sales offer insights into the mindset of everyday citizens and can be a leading indicator of a shift in perceptions about inflation and social unrest. The statistics are striking.

What’s most interesting is that the premiums being paid for gold and silver at the retail level are included in commissions. Dealers quote prices as “spot plus $7.00” or so in silver and “spot plus $90” or so in gold.

The expansion of commissions does not reflect dealer operating costs. It reflects scarcity, which does not exist in paper markets because paper contracts can be expanded at zero marginal cost.

The bigger question for investors is, when does scarcity in physical bullion play out in the paper contract world? That may not happen for some time, but when it does, it will be an earthquake.

Much is changing with commodities blazing forward… A $1.9T stimulus bill around the corner… And the economy growing rapidly from the last round of easy money.

Given the setup, it seems the market has established a floor for gold prices, which means these prices will not remain where they are for long.

There are a few different options for gold exposure. The simplest way is to own the SPDR Gold Trust ETF (GLD). Mining ETF’s are a great way to pick up dividend income while getting gold exposure. VanEck Vectors Gold Miners (GDX) has the extra benefit of having foreign-owned miners in its portfolio, which is a boost for performance during a weak dollar environment.

But nothing beats holding the shiny stuff in your hands...

Not investment advice. Seek advice from your advisors. It's your money and your decision.