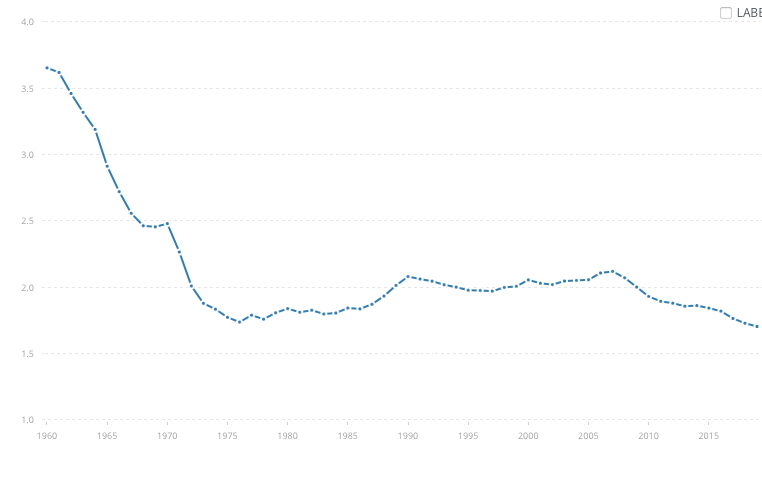 With the recent release of the US Census we are getting a picture of the upcoming demographic time bomb facing the country.

The 2020 census revealed that there are 331 million US residents, which represents a 7.4% increase since 2010. This is significant since this period is the second slowest rate of growth we have experienced as a country since the Great Depression and roughly half the growth rate we experienced during the 90’s.

When you combine the lower birth rate and declining immigration with a rapidly aging population, it indicates that we are entering a period of substantially lower population growth. If it stays this low, it could mean the end of American exceptionalism in this regard.

The US population has always outpaced the growth of other developed countries - but that’s no longer the case. This means that the US is losing one of its major competitive advantages.

Why are we experiencing low population growth? Fewer births and more deaths reflect a reality where more people are delaying child bearing and delaying marriage, as well as a rise in drug and endemic-related deaths. 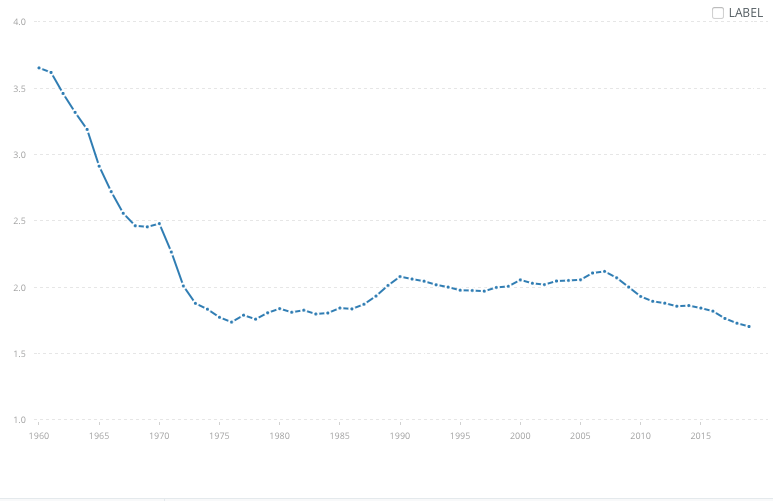 US Birth Rates Continue to Decline

The average age of Americans also continues to rise because of this trend. 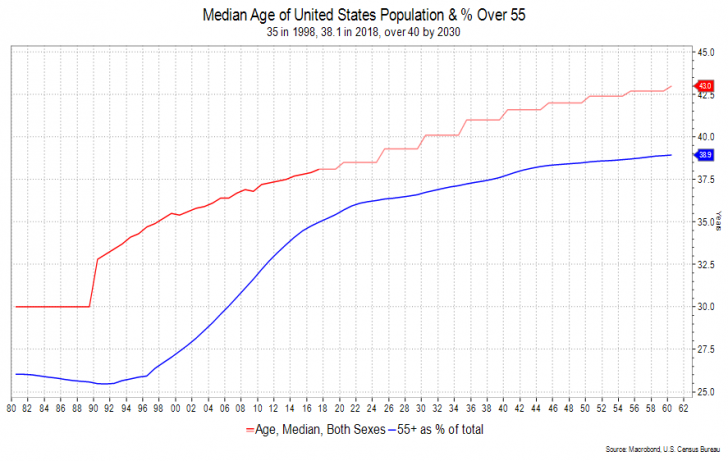 While Average Age Continues to Rise

The current birth rate of America is 1.7 - which is below the threshold for the replacement rate of 2.1. Historically, the answer to this demographic quandary has been immigration, often from Mexico, but we haven’t seen the immigration levels we’ve had in the past.

Lower birth rates in Mexico and a generally improving economy means that the historical source of the majority of immigration is lower than usual.

What are the implications of this slowing growth rate for the U.S.?..

The growth rate of our nation is as tepid as it’s ever been at any point in our history, and we are likely to see a slowdown of economic output as a result. Fewer people producing.  Fewer goods and services being produced.  We have more people above the age of 80 than we do below the age of 2. Like in Japan, there will come a time when we sell more adult diapers than baby diapers.

With fewer people in the country producing fewer goods and services we will see a lower GDP over time.

We have to face a couple of different things...demographic issues affect economic issues.

Other countries are facing the same issues and have begun offering incentives to young people to encourage a higher birth rate.

From an economic perspective, this means we are going to have a hard time funding social safety nets and entitlement programs for citizens of the U.S.

Ideally, every generation is larger than the previous generation. That is not happening.  It should look like a pyramid with more younger people at the bottom helping support the tip - the older demographic.  ...but the current reality is an inverted pyramid. The younger generation is having children at a much reduced rate.

With 78 million Baby Boomers, there are not enough younger people working to support Social Security, Medicare, and Medicaid. This means that we will need massive infusions of cash - above and beyond current tax revenues - to pay for these programs.

So, how to save for retirement, given this reality..?

The only real solution for retirees facing this sort of demographic time bomb is to save in tax-free vehicles. You have to pay taxes on your dollars now at these historically low rates. So, when you take them out in the future - when tax rates are likely to be dramatically higher than they are today - you have paid the piper, and will take them out tax-free.

If you're trying to make a decision on whether to take a tax deduction today, or to forego the deduction, pay the tax now, and move from 'forever taxed to never taxed', the results of the census give you even more motivation for doing so.

If you’re one of the 95% of Americans that have the majority of their money invested in tax-deferred (tax-postponed) vehicles, it’s time to take advantage of today’s historically low tax rates. These rates expire in 2026 under current law, which means most of the heavy lifting needs to be done in the next 4-5 years.

Given Joe Biden’s position on taxation, the above statement is subject to political change.

2030 may well be a perfect storm. Demographics, underfunded entitlement programs, and economic events will converge and could lead to a very difficult time. The predictions by Brian Beaulieu have been accurate for decades. He predicted the 2008 crisis and the 2001 economic crisis. In Prosperity in The Age of Decline he sounds a serious wake-up call.

Demographics are your destiny.

You can predict the future by predicting demographics.

NOW is the time to act. Move from forever taxed to never taxed. Ask us how to properly plan.