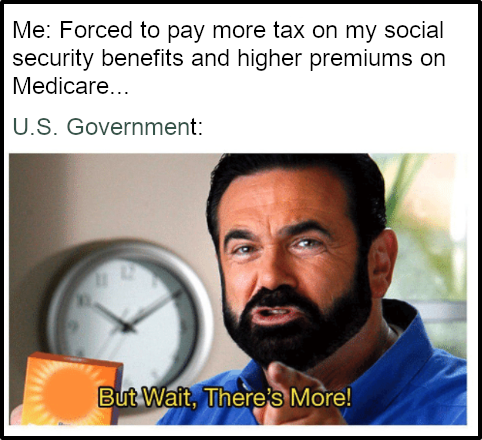 In January, we'll see an 8.7% increase in our Social Security checks with the cost-of-living adjustment (COLA) – the largest increase since 1981.

On the surface that sounds like great news, right? I mean, who wouldn't want a bigger Social Security check?

However, the devil is in the details, especially when it comes to retirement income, government benefits, and taxes!

Yes, the same hand that giveth, also taketh away…

Many people aren't aware that it's common to owe taxes on your Social Security benefits. Currently, if a couple makes over $32,000 (from retirement account withdrawals and other sources), 50% of their Social Security income gets taxed.

If a couple retires with an income above $44,000, up to 85% of their Social Security benefits are taxed!

I know this doesn't sit well with many of the retirees we work with. I hear it all the time:

"What? You're telling me all those mandatory contributions I was forced to make to the government for all my working years are also going to be taxed in retirement?!"

You see, Social Security benefits weren't taxed initially. But in 1983, Congress decided that up to 50% of benefits could be included in taxable income. Later, they raised the percentage to 85% for higher-income folks.

Plus, when the government introduced these changes to Social Security in the 1980s, they completely ignored the impact of inflation.

In other words, they did not index the thresholds to inflation. This means that tax bills get higher as inflation gets higher each year.

When this was introduced, only 10% of Americans broke the income thresholds that require tax payments on their Social Security benefits.

Your Social Security benefits aren't the only taxable income you have to worry about… a higher taxable income can make your Medicare premiums go up, too.

But this is important for you to know…

The IRS uses income reported on your federal tax return to determine the size of your Medicare premium payments. And a big cost-of-living increase, like the one happening in two months, can bump you into a higher premium payment.

As you know, you also have to pay income tax on withdrawals from any tax-deferred accounts, investments or pensions. This includes any withdrawals you take from traditional IRAs, 401(k)s, 403(b)s and similar government-controlled retirement plans, and tax-deferred annuities.

After all that, how much money will you actually have left over to live on in retirement?

For many, the answer is "not enough."

There's a way to structure your retirement income to minimize or even eliminate all these hefty taxes and costs. But the window to do this most efficiently is closing.

Contact us if you’re open to discuss these strategies.